Carving out time for hiking, valued though it is, often takes quite the effort. Because of this, I am always very grateful for the Lookout Mountain segment of Chickamauga and Chattanooga National Military Park. When you have 3 hours for a hike, 30 minutes (round trip) in the car and 2-and-a-half hours on trail is far preferable to driving a long way for a short walk.

In thick irony, all of the peaceful parkland around our city is only here because the violent deaths of several thousand men on these grounds in 1863. There is room for reflection there (of which more another time) which does not go unnoticed, but we locals love the battlefields for the 9,000+ acres of public land they afford. My kids are growing up with this heritage, and they already probably think it’s odd that you don’t have cannons all over the place where you live.

I’ve trod many a mile around this old mountain, handy as it is (much of it  within Chattanooga’s city limits). Trucks and trains rumble just beyond the park’s edge, and there are two fully functioning towns (Both conveniently named Lookout Mountain—one in Tennessee, one in Georgia) atop the plateau, but the trails quickly open to mature forest.

Yesterday, Rachel & the older two girls had a birthday party to attend, so I “volunteered” (read: begged) to watch the youngest and spare us the experience. It was nice out (this fall as been terribly warm), so we decided to head for the woods.

Selfies are not my forté, but at least toddlers in backpacks are cute.

We parked over on the west side of the mountain off Wauhatchie Pike  (near the Chattanooga Nature Center), to go upslope via the Kiddie trail (named for someone, not made for kids)/Skyuka Springs Trail/Gum Springs Trail. Time (and the limited patience of strapped-in children) kept us from making it all the way to Sunset Rock, but we were headed in that general direction.

Kiddie is not terribly scenic, just a steep access path into the rest of trail network. A number of downed trees (probably dating from a bad tornado outbreak a few years ago) left the canopy spotty enough that the lower trail is rather overgrown and weedy. 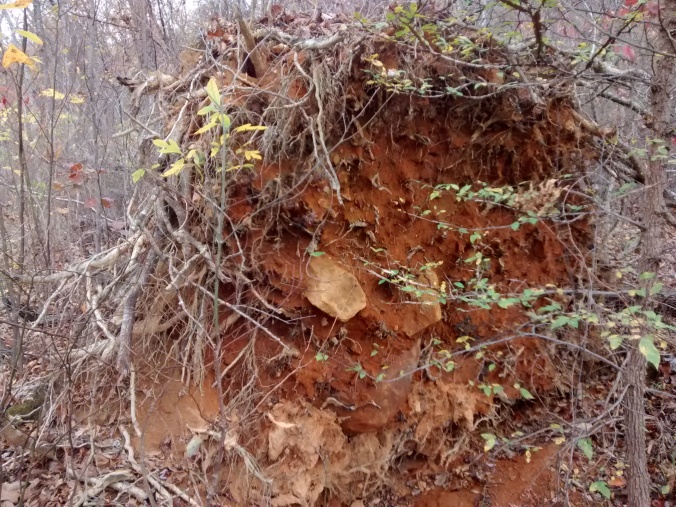 Further up, there were still a few fall colors poking through, and plenty of the usual Cumberland Plateau scenery (boulders, oaks, streams, etc.). 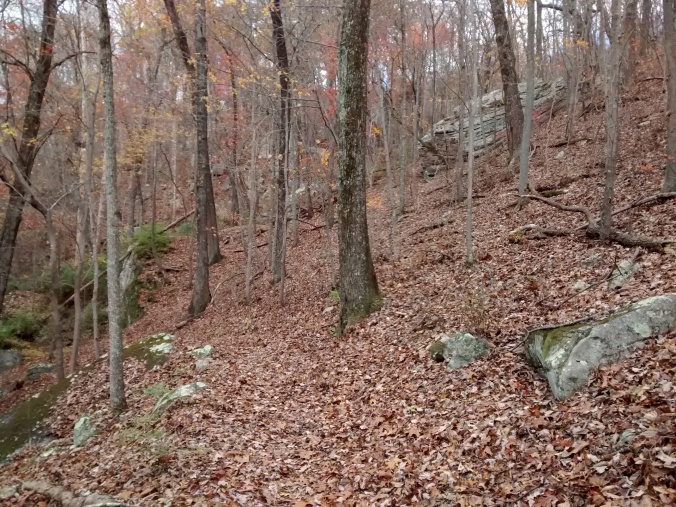 As an aside, this area always makes for some interesting plant finds (like the Japanese burning bush shown below). Homeowners on the brow of the mountain above must toss their yard waste over the cliffs, and enterprising seeds and shoots take root in the woods below. A lot of what you see growing down there does not “belong”.

A few miles of foot-pounding does a body (and soul) good, but I’m not certain my passenger felt the same. She didn’t cry, though she did hold on to my shoulder for most of the ride; for her first time in the backpack, I suppose she thought she was “floating” behind my head and not entirely confident of her situation. It’s the price you pay for being my kid, I guess.