As is our custom, my wife and I go in fits and starts when it comes to movies. Life gets busy with multiple kids, and free time to give to feature-length movies at the end of tiring days gets slim. In other seasons, time gets more flexible, but energy wanes—such as Rachel’s recent pregnancy and our present late nights (and early mornings) with our newborn fourth daughter—and grabbing a DVD from the library or taking a month-long spin with Netflix starts to seem like the most one can accomplish of an evening.

As is my custom, here, in no particular order, are brief reviews of some of the films we’ve watched in recent months. Most are from the batch of 2017 releases that made it into the annual crush of awards nominations. A few are from years past, and one is from 2018. 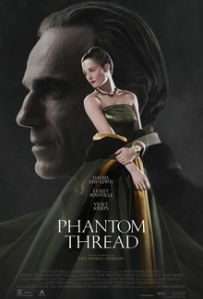 Daniel Day-Lewis’s last collaboration with director Paul Thomas Anderson, the tooth-grittingly intense There Will Be Blood, is among the most impressive displays of acting in modern film. The plot of that film is almost irrelevant, absorbed into the supermassive roles filled by Day-Lewis and Paul Dano. With that in the rear-view mirror (albeit 10 years ago), I had high hopes for this one.

The story Anderson crafts here is similarly sparse, but whereas Blood fills the world entire with its characters, Thread shrinks the world until the small, self-absorbed characters can stride their petty domain (set in the fawning high fashion scene of postwar London) with seeming omnipotence. The key plot twist opens a way out of that world through a cruel, nearly murderous caprice that becomes a strange ritual for the central characters.

Shorter Phantom Thread: Beautiful to look at, and of interest for those trying  figure out how to love a prima donna, but overall somewhat forgettable.

I don’t do superhero movies (except Christopher Nolan’s Dark Knight trilogy), but Ryan Coogler’s Black Panther became such a phenomenon that I gave in. The hype was not a mistake, and I couldn’t contain my enjoyment. I saw it twice, but several friends saw it 3, 4, or 5 times.

The story is intriguing. The characters, their histories, and their motivations are well-rounded and believable keeping a pace that lingers over the tender and the poignant while barreling forward with the energy we expect from action flicks. The social justice messaging is all the more powerful for being central to the plot. Hollywood learned quite a lesson about the power of offering a dignifying, culturally mainstream vision of themselves to marginalized groups (as of this writing, it is the 9th highest grossing film of all time).

World War II movies are a staple of cinema in a way that other wars never have completely attained. A combination of the timing (arriving in the midst of Hollywood’s “Golden Age”), the fact that so many top-tier actors and directors served in the military, and, and the emergence of so many larger-than-life characters on the world stage through battle heroics and political machination. Even now, as veterans of that struggle are rapidly fading from the scene, the collective imagination sees that fight as a fountainhead of stories of virtue and valor.

Winston Churchill, more than any other figure, is the avatar of the free world’s resistance to tyranny during the war. When an acclaimed director and beloved actor (Gary Oldman) team up to paint a new picture of Churchill, there will by hype, and Oldman, at least lives up to it—growling and cigar-chomping his way to an Oscar. Still, the film as a whole succumbs to poor pacing, self-importance, and some foolish historical gaffes that undercut its strengths.

Shorter Darkest Hour: This year’s version of the “one-man-show-does-not-a-story-make” vehicle. 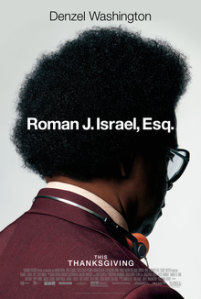 Denzel Washington has enjoyed tremendous acting success over the years, and, with 2016’s Fences seems to have come into his own as a director as well. In other words, at this point in his career, he can do whatever he wants.

In some ways Roman J. Israel, Esq. feels a bit like a vanity project, with Washington cast as a long-suffering defense attorney who dreams of overturning  unjust sentencing practices in a civil rights suit. Rather than succumbing to preaching, though, the movie takes a sharp turn when Israel loses hope and gives into a grave temptation (essentially trading the moral high ground for cold, hard cash). This move almost redeems it from the failures of uneven pacing and a weak supporting cast.

It’s been a while since I’ve seen, let alone appreciated, a Pixar movie (Inside Out was good, the last great one was Toy Story 3). That said, I was prepared to be disappointed by Coco. Far from being the simplistic, culturally-appropriative fare that has made Walt Disney, Co., a multibillion dollar gorilla, this one represents a return to Pixar’s pre-acquisition form.

If ever so slightly derivative (astute viewers will notice parallels [a nicer way to put it would be “allusions”] to Finding Nemo, Monsters, Inc., and even a bit of Back to the Future), the heart of this story is a powerful rebuke to the standard sage-kid-dumb-parents trope of so many children’s movies.

Shorter Coco: Even when they get a little lazy with the story, Pixar still brings the emotional heft.

As mentioned above, I brake for Christopher Nolan films. The guy’s got a great eye, bringing old-school Hollywood camera magic to an age drunk with CGI and other whizbangery. When I heard he was working on a piece about one of the least appreciated events of WWII (though, it should be noted, that the aforementioned Darkest Hour covers a similar time period from the political, rather than the military side), I was ready to go. Somehow, though, I missed the theater run and had to add it to the video hopper.

No matter. It was still excellent (if less overwhelming on the small screen). Nolan uses silence, stoicism, and suspense to draw raw emotion from viewers, managing to convey the German attackers as more phantoms than men. The closing sequence alone is worth the whole movie.

Shorter Dunkirk: The most beautiful war film ever shot.

The Washington Post as a publishing entity is a fine paper, and its reputation for in-depth investigative journalism in the nation’s capital is well-earned. It’s even been amply celebrated in film—1976’s All the President’s Men immortalized Carl Bernstein and Bob Woodward’s exposé of the Watergate scandal. The Post, covering the 1971 publication of the Pentagon Papers and the legal/financial drama to which that exposed publisher Katharine Graham, promised a strong “Woodstein” vibe, a reminder of what American Journalism can do for the age of “Fake News.”

What we got instead was only OK. Hanks is Hanks, Streep is Streep, and Spielberg keeps trucking in his self-appointed “historian-in-chief” role, but the movie’s awareness of its importance cut its sense of narrative and pacing, making it fall rather flat. Not bad, but it should’ve been better.

Shorter The Post: Spielberg, Hanks, and Streep are phoning it in, but we all keep watching anyway. Also, Absence of Malice continues to be my favorite newspaper movie.

All the Money in the World

In 1973, the grandson of oil magnate J. Paul Getty (at the time, the richest man in the world) was kidnapped in Italy and held for a colossal ransom. The trouble was that Getty had been somewhat distanced from that side of the family since his son & daughter-in-law divorced, and he refused to pay, much to the confusion and consternation of the small-time mafiosi responsible.

This high drama lends itself to a nail-biting thriller in the capable hands of Ridley Scott. The movie was subject to its own drama during production, when disgraced star Kevin Spacey was replaced at the last minute with the legendary Christopher Plummer (Plummer shot all his replacement scenes in just 9 days, and the film still released on its scheduled date). I expected this to be entertaining and exciting, I was surprised to find it also to be a profound meditation on the dangers of money.

Shorter All the Money in the World: Generational wealth is a curse; Christopher Plummer is amazing.

While on a Ridley Scott high after All the Money in the World, I finally picked up 2015’s The Martian (which, with Nolan’s 2014 Interstellar, could almost have started an entire “rescuing Matt Damon from other planets” genre). Set in the near future, this story attempts to take interplanetary travel from the realm of Science Fiction and bring it down to daring plausibility. It’s well acted, well paced, and quite enjoyable overall.

And yet…the past three years have not been kind to this movie. It feels already like a relic from another epoch, filled with the scientific hubris and international-relations optimism of the Obama presidency. In the world of Brexit, Trump, Xi, and the rise of national/populist strongmen across Europe and Asia, the “science” of The Martian feels much more like fiction. The glory days of NASA are long gone, and there’s no sign of their return anytime soon.

Shorter The Martian: Way, way, to high on “Science”, but still well done.

I can’t remember the last time I cried watching a movie (not counting Les Misérables—since I cried at the theater when I saw it on stage first). 1989’s Italian masterpiece Cinema Paradiso will do it to you, though. It’s got family drama, friendship, tragedy, Ennio Morricone music, and a full-blown heartstring-tugging, memory-lane finale. Bonus: this is on Netflix currently.

Watching this one, though, what struck me most is how unlikely it is that an American director would come up with a story like this. It’s so small, bounded by its Sicilian village setting, and yet it swells to fill the world entire. Fittingly for a movie about movies, it reminds us that they can and should be an artist’s tools for beauty and contemplation, not simply vehicles for commercial escapism or social messaging.

Shorter Cinema Paradiso: Why don’t they make movies like this anymore?