Originally from my blog at Disciple Magazine.

American culture thrives on the grandiose. “Bigger is better,” “Go big or go home,” “Too big to fail,” and the like are our taglines of choice. Anything we do is bound to be better if you toss a “mega”, “super”, or “hyper” out front.

Neither is the Church immune to this phenomenon (witness “megachurches” and “celebrity pastors” in case you have any doubts). It cuts across theological and denominational lines, to the point that we are not even aware of it or how it colors our witness. An implicit code demands every event or project we undertake be thoroughly planned, promoted, hyped, executed, well-attended, and measurable. If any step of that procedure is given short shrift, we question whether anything “really” happened.

Over 50 years ago, novelist Walker Percy fingered the wrist of post-WWII America to find this idea pulsing within.

In The Moviegoer, Percy paints his protagonist, Binx Bolling, as a dislocated individual—lost in suburbia and the art of moneymaking, yet oddly ill at ease with nearly every aspect of existence. Binx seeks significance and transcendence in watching and re-watchi 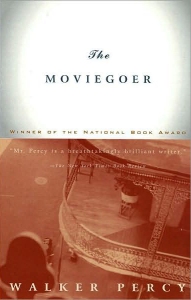 ng popular movies; the shared world of mass culture is more real to him than anything else. Through Binx (and one scene in particular where William Holden’s presence brightens an otherwise dull afternoon in the French Quarter), Percy describes how people and places are authenticated, not by their actual nature, but only when they are acknowledged by the transcendent reality of Hollywood.

This desire for worldly significance, to be on the radar of the kingmakers of politics and mass media, afflicts almost all Americans, and it has only metastasized since Percy first diagnosed it. Only rarely do we see it outright; more often it seeps into our thoughts and actions with hidden designs for otherwise innocent and noble work. END_OF_DOCUMENT_TOKEN_TO_BE_REPLACED